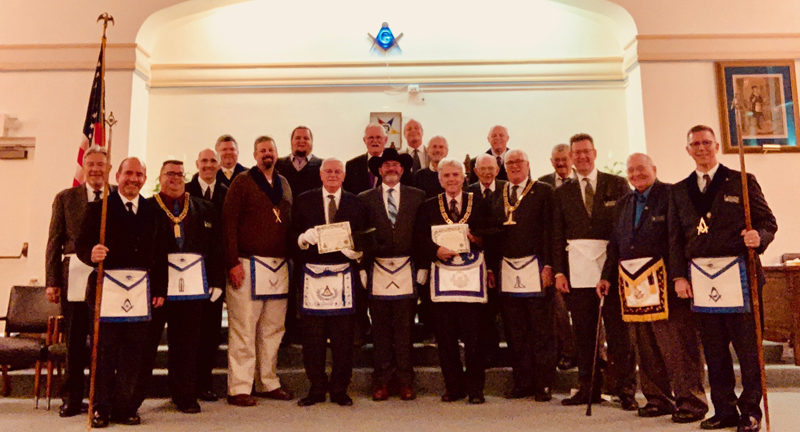 Freemasonry includes several aspects which, in their specific combination, are unique to it and not duplicated in any other organization.

While there exists no single, binding definition of “What is Freemasonry,” here is an overview of the basics of Masonry, which we believe most Masons would agree with:

The Oldest, and Foremost, Fraternal Organization in the World

The origins of Freemasonry go back so far that they are literally lost in antiquity. An ancient parchment known as the Regius Manuscript, which was written around 1390, is generally considered the first document to explicitly mention it; and the document implies that it had already existed long before that. Modern Freemasonry was organized in its present form in 1717 in London.

Today, our “Gentle Craft,” as we sometimes call it, counts over 3 million members, 1.1 million of whom live in the United States and Canada.

No other group can make similar claims, so in terms of both its longevity and its scope, Freemasonry can rightfully assume the title of the leading fraternal organization in the world.

Freemasons are active in most of the countries of the world. Regardless of where they live, Masons recognize one another not merely as members of the same club. Masons consider one another genuine Brothers who, regardless of social standing, ethnicity, religious beliefs or political views, stand united in supporting one another in a shared quest to become better men.

Though Masons will find Brethren with whom they can readily connect virtually anywhere they go, the true center of Masonic activity is the local Lodge. There, Masons meet on a regular basis to practice our Craft and to engage in genuine fellowship. Any man who joins a Lodge and attends regularly will soon form not just acquaintanceships, but deep friendships that can last a lifetime.

A Practical Philosophy of Doing Good and Self-Improvement

The primary reason why Masons so readily experience such a strong sense of Brotherhood – despite many inward and outward differences – is that all subscribe to a philosophy founded on Faith, Hope, and Charity. These lead us to the principles of Brotherly Love, Relief, and Truth, which form the foundation of our Masonic journey.

Brotherly Love means exactly what it says: truly loving one another in not just an abstract sense, but in practical acts of caring even when we falter. Relief means seeking to help those in need in the way they most need it – from a kind word to significant financial assistance. And truth means – beyond avoidance of lies and falsehood – a genuine quest for that which is real and genuine in the world, in ourselves, and in our relationships with others. Masons endeavor to practice these principles among themselves, and with all their fellow human beings.

Moreover, Masonic philosophy goes far beyond the statement of lofty goals – often shared by non-Masons – in general terms. Masonry offers its members practical instruction on how to incorporate its guiding principles into everyday life on an ongoing basis. In fact, the degree ceremonies in which all Masons participate as they progress in the Fraternity concern themselves primarily with practical moral and ethical instruction.

All active Masons meet together for fellowship, ceremony, and instruction; and the vast majority take very seriously their commitment to Brotherly Love, Relief, and Truth. It is, however, up to the individual Mason to decide what he wants to get from the Fraternity, and what he wants to put into it. For example:

The individual Mason can, of course, combine these aspects of Masonry in any way that fits for him.

… hopefully, this gives you an idea of what Freemasonry is. Such an overview, however, would not be complete without dispelling some common myths and misconceptions. So here are a few things that Freemasonry is not:

NOT a “Secret Society”

Masonic meeting places, called Lodges and sometimes Temples, are out in the open and listed in all the (digital) “Yellow Pages.” So are all the Grand Lodges which govern them, as are the various Masonic appendant bodies.

It is up to the individual Mason whether he wishes to make his membership known to others or not, but this is no different than any other club or society one might join.

Yes, it is true that Masons have “secret” modes of recognition such as passwords and grips (“handshakes”) which they promise not to reveal. In practice, this promise serves more to build a sense of identity and fellowship – much as the “secrets” of a college fraternity do – than to actually prevent non-Masons from discovering them.

NOT a Conspiracy or Behind-The-Scenes Government

Discussing politics is not permitted within the Lodge, as it is a subject that often creates dissension. Lodges and Grand Lodges are forbidden from taking a stand on any political issue. Furthermore, Masonry never tells its members what to think or do, with the exceptions of (1) how to conduct Masonic rituals; (2) the injunction against revealing “secrets”; and (3) the practice of Brotherly Love, Relief, and Truth. While all Lodges are under the authority of their respective State Grand Lodges, the Grand Lodges themselves are totally independent from one another. There is no central Masonic governing body or authority in the United States, much less worldwide.

With neither a political philosophy, any venue for political discussion, any means to organize politically, nor any form of command-and-control structure, it would be impossible for Freemasonry to set up a “conspiracy” or “shadow government” even if it wanted to.

NOT a Religion or Anti-Religion

The fact that Masons must believe in a Supreme Being (Deity) as a requirement for membership, and that they invoke Deity’s aid and guidance as they seek to improve themselves through Masonry, leads some people to conclude that Masonry is a religion unto itself. Conversely, because Masons are free to belong to any religious denomination or organization they wish, some non-Masons infer that Masons must believe all religions to be true or equal, or that they cannot believe in or practice one religion to the exclusion of others.

In reality, Masonry has no Deity of its own and no theology. It claims no divine revelation. It takes no stance on any religious issue, doctrine, or practice. Nor does Masonry favor one religion over another.

Masonry does, however, require its members to treat one another with brotherhood and respect regardless of their religious beliefs or affiliations. And it explicitly forbids discussion or debate of religion, or of religious issues, within its Lodges. Why? Because religious beliefs, like political ones, often divide people. That said, each Mason is free to unequivocally embrace and practice any religion he chooses; and also, to whatever degree he may wish, to disbelieve any or all other religions or doctrines.

NOT a Fast Track to Success or Influence

Lastly, some non-Masons think that joining our Fraternity can give them an “in” in business, government, or other institutions of the society as a whole. They imagine that after being initiated into Masonry, they will gain privileges that range from finding more customers to getting a better job to having their traffic tickets dismissed. This, however, is simply not true; and if such “advantages” are your primary goal, you would do well to look elsewhere rather than to Masonry.

Because Masons regard one another as Brothers, they do often form friendships that can sometimes lead to business dealings. But this is no different than what happens within any other organization such as a tennis club, a book discussion group, or a bird watching society. Any sort of underhanded dealing or illegal privileging is strictly forbidden by Masonic principles. And nothing will earn you the disdain of Lodge members more quickly than handing out business cards and attempting to promote yourself to them – regardless of whether you are a Mason or not.

… Hopefully, this overview has answered your questions about our beloved Fraternity and has given you an idea of what you will find if you become a Mason.

If this has piqued your interest, or if you just have more questions about Masonry and would like to satisfy your curiosity, we welcome your inquiries. Please don’t hesitate to reach out to us here.