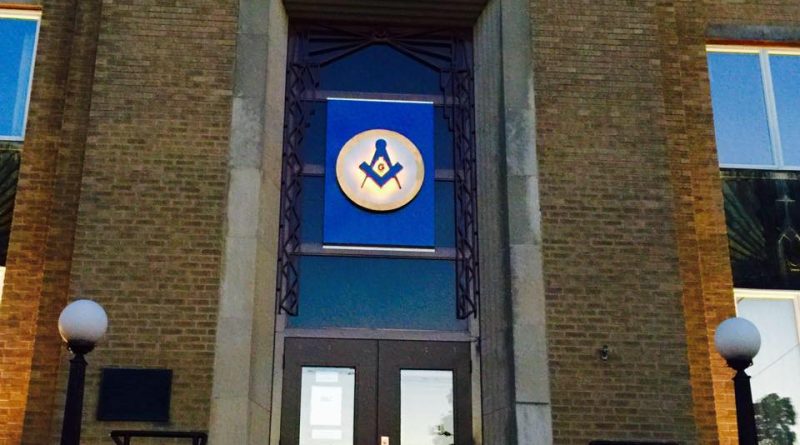 The following historical overview of our Lodge was written and presented by RWB Drew Lambert at the Sesquicentennial celebration of Libertyville Lodge on September 16, 2017

The Charter of Libertyville Lodge #492 having been received, and brother George Dewey of Waukegan Lodge #78 having been deputized to consecrate the lodge and install its officers, the brethren met at the hall where the necessary ceremonies were gone through with where, the brethren formed in procession and marched to The Grove House Hall where the lodge was publicly consecrated and the officers installed in due form.

The officers installed are as follows:

An address was delivered by Reverend Brother R. R. Storm after which the brethren were again formed in procession and returned to the hall.

150 years, 10 months and 29 days ago, this entry in this ledger marks the genesis of Libertyville lodge.

Since that fall Thursday in 1866, we are the fortunate guardians an unbroken chain of records. They capture the events and happenings of this lodge and its reaction to other noteworthy historical affairs. This lodge has observed the will and pleasure of 78 Most Worshipful Grand Masters. We have installed 114 different men to the office of Worshipful Master. Those Worshipful Masters have presided over more than 6,800 meetings, both stated and special. Through the course of those special meetings, we have obligated and raised 980 master masons. Those 6,800 meetings were masterfully recorded by only 20 different secretaries.

As a lodge, we have witnessed the inauguration of 29 US presidents, And the Ratification of 13 amendments to the constitution. We have endured the addition of 14 states to the union and stars to the flag. There are multiple records of buying various new starred flags – 44, 48, & 50. Countless Members of this lodge have dutifully served and participated in 7 major wars. We have seen Prohibition enacted and repealed, survived the Great depression, responded to the great Chicago fire (1871) and rebuilt after the Libertyville fire in (1895).

We have experienced life, before and after, the Electric lightbulb, the automobile and indoor plumbing. We are 20 years older than the Statue of Liberty 1886 and Frank Lloyd Wright, and we celebrated the Cubs winning their first World Series.

History of the Lodge in Libertyville

As one of the 20 secretaries to serve this lodge, I have had the privilege and pleasure to read through over 4,000 meeting entries to date, (only 2,600 meetings to go…) in an effort to condense any notable events that make up the written history of our lodge. I can also attest to the fact that a few of these men should never have been elected secretary. Let’s just say their penmanship was less than perfect!

In the early formative years of both the lodge and the village of Libertyville itself, there are a host of striking similarities. Ansel Cook House, Fred Bulkley Road, Butterfield School, Fred Underbrink, Austin Avenue, Isaac Heath, Dymond Lake, Rouse’s Service station, Proctor’s floral shop, Butler Lake, Langworthy’s department store, Miller-Kruger autos, Marquardt dealership, JC Forney realtors. Most of these marque men were lifetime residents of Libertyville and all were pillars in the community.

They were all Masons.

They were born here, attended school here, raised their families here and ultimately died here. Upon the death of any one of our notable members, it was the custom of this lodge to assemble at the Hall, march in procession to the brothers’ home and escort his remains to Lakeside cemetery just down the street to our north. After the graveside services the members would then march in procession back to the hall and retire to any one of our neighboring churches here for a luncheon.

The quest that charged my initial query of these records was looking for any information regarding this jewel. 14 Past Masters jewels were commissioned by a local jeweler on 10-27-1911 and presented to the 13 current living past masters at that time. Their cost was $25 apiece.

My PM Jewel here was made for Ralph Bulkley. Worshipful Master in 1897, 98, & 99. It has since been worn by his son Fred Bulkley, my grandfather Harvey Bauer, my father Greg Lambert and myself for 72 consecutive years at the left of the worshipful master as secretary. While I have no aspirations to challenge my grandfathers’ tenure of 38 years in this corner of the lodge, I will say that It is truly a humbling honor to be charged with the duty of adding to the written story of our lodge.

Two major adornments that I feel are worthy of mention here, are the masters portrait gallery in the tiler’s station and our altar bible. The gallery is a complete picture and photographic record of every man that has served as Master from the beginning. The album was first considered in March, 1910. Consider now, the logistics of the period, trying to track down 30 different members, several of which had died, without the luxury of our present day communications, most didn’t have phones, and once you found them, you hope they had a portrait. Jump forward now to April, 1927 and there is finally a bill for 20 new sepia portraits and 18 copies of originals. An amazing feat to say the least!

The bible we use at our altar is another treasure. We tend to toss it around as another piece of regalia. I guess that serves as testimony to the quality of its construction. It is a beautiful artifact of the lodge. It was donated by Fremont C. Knight on June 30th, 1883, 3 years before he served as Master.

It is a solid, leather covered book, monogrammed on the cover with the details of its presentation to the lodge. Consider now that if it has been in service at all the meetings from 1883 to the present, it hasbeen opened 6,200 times and supported 2000 obligations! That, my friends, is a well-crafted book!

Before moving into this building, the lodge rented space in 4 different buildings along what is now Milwaukee Ave. (all of which were owned by brother masons)

The first mention of a search committee for constructing our own building was in 1910.

Several payments and improvements were funded through the 1920’s.

Construction of the building took just 10 months. On July 8, 1932 Dwight Dolph presided over the first meeting in the Temple.

Moving forward to the 1950’s, lodge began a much more active social calendar. There’s mention of attending Blackhawks, bears, and Cub’s games. Trips to the dinner theater were a regular event too. Past masters dinners averaged 120-140 attendees.

The one event of personal interest to me is the Lodge Christmas party. The “first annual” Christmas party was in 1959. By 1961, this event turned into quite the circus production. There were 21 members listed on 7 different committees. The summary report in January had over 300 attendees, entertainment was provided by a magician and singing carols, then watching a 16mm film of Rudolph the red nosed reindeer here on the west wall. The evening culminated with retiring to the dining hall for refreshments and a visit from Santa where every one of the 100 children received a gift! While the first one I remember in 1976 or 77 wasn’t quite that large, it was exactly as they described that first one in 1959.

Unfortunately this is the end of my reading efforts so far. As symbolic masons, we learn all of the various uses for the tools at our disposal. As a practical mason, your work and progress will only ever be as good as the foundation. As speculative masons we all started in the same corner of the lodge and I am truly encouraged by the foundations our predecessors have set for us to continue building this lodge upon.