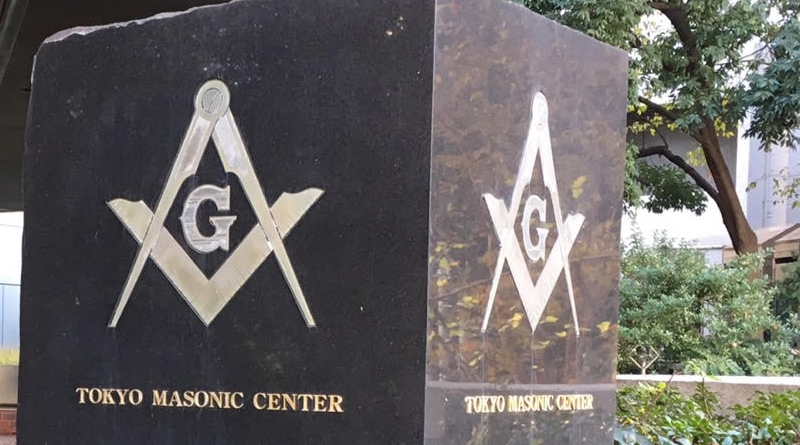 Over the Holidays, our Lodge Brother Patrick Sand traveled to Japan, and took the opportunity to attend the Grand Lodge of Japan in Tokyo. Here is his account of the visit:

My recent trip with my wife to Japan allowed me a rare opportunity to visit both the Grand Lodge of Japan as well as attend a stated meeting for DeMolay-Land Lodge #22 which also meets in the Tokyo Masonic Center.

In preparation for the visit, and since I am still very new to the fraternity, I first solicited the aid of my lodge Secretary from Libertyville Lodge #492, who put me in touch with the Chairman, Foreign Jurisdictions Committee and Assistant Grand Chancellor for the Grand Lodge of Illinois. RWB John Loayza became a conduit for my visit to Japan, and made the planning for my visit much easier.

This was also a great learning experience, as it showed me how grand lodges between states or countries may communicate. Also, it created a formal communication route between myself and the Grand Lodge of Japan, as well as with the officers of Lodge #22 whose stated meeting I hoped to attend. After receiving the appropriate traveling papers from the Grand Lodge of Illinois, I was ready for my first time to ‘travel’ to a foreign country as a master mason!

I had confirmed that DeMolay-Land Lodge #22 was meeting on December 15, 2018….a very significant date as it was on this date that I was initiated into the fraternity as an Entered Apprentice exactly one year ago!

Lodge #22 conveniently meets in the lodge room within the Tokyo Masonic Center in Minato-Ku, Tokyo. This building has a unique history, and is also nestled in the shadow of Tokyo Tower! Upon arriving at the center, we noticed both the subtle presence of the building, as well as the lack of external adornment or signage, other than a simple stone pillar with the S&C with the description of the building.

I was lucky to arrange a quick meeting with the brother with whom I’d corresponded to arrange the visit, MWPGM and current Grand Secretary, Yoshiharu Shimokawa! I was glad to have the opportunity to meet with him, and he was kind enough to take time from his schedule to give my wife and I a short tour of the building.

The size of the Masonic Center in Tokyo is very deceptive…as the interior boasts a significant underground level housing the main meeting halls. I was truly impressed by the lodge room, as a significant amount of thought had gone into both the design, as well as the maintenance. It was truly spectacular! As an added bonus, the large hall used for Scottish Rite meetings had been converted into a reception hall for the dinner which was scheduled following the Stated Meeting.

Shortly after our brief building tour from MWPGM Shimokawa’san, both he and my wife departed just as the members of Lodge #22 were beginning to arrive. I and several other visiting brethren were soon asked to provide the appropriate documentation, as well as endure a short examination. After the formalities were concluded, we signed into the lodge book and walked past the Tyler. I will not soon forget the Lodge’s Tyler brandishing an authentic Japanese katana (sword)! It certainly left an impression!

As an international visitor, I and the other brethren were invited to present ourselves. In attendance at this meeting were brethren from various countries including USA, Russia, India, Finland, and Georgia. It was a distinct honor to extend welcome and open invitation to the brethren in attendance to please visit and attend lodge in Illinois if they had the opportunity! The same sentiment was equally shared from all other countries representatives. It was also a pleasure to present the current Worshipful Master, Cohan Nishikawa, with lapel pins from Libertyville Lodge #492, as well as Illinois Grand Master pins which were kindly provided to me by my DDGM, Mike Blasius. I was not surprised to find all the visitors were presented with a gift of a lapel pin for DeMaoly-Land Lodge #22! I plan to wear mine with pride when I next attend my home lodge meeting in Illinois this January!

This particular December 2018 stated meeting for DeMolay-Land Lodge #22 also included a couple of elements which were very interesting to experience. Other than the typical meeting agenda topics, the agenda included the return in open lodge of a Fellowcraft Proficiency exam and the Lodge #22 annual officer elections! Both of which were conducted with efficiency and pride! Immediately following the meeting we were able to collect everyone for a group photo of the almost 50 brothers in attendance!

Following the conclusion of the stated meeting, we all were invited to attend the dinner reception planned to celebrate the end of the masonic year, the start of the 2019 New Year, and congratulate the newly elected officers. The dinner was joyful, and included several speeches, a lot of laughter, and some great sashimi!

It was a wonderful experience to attend lodge in another country…with my one key take away being a very clear impression that I am truly part of a global fraternity. I have never felt more welcome…and frankly, felt equally at home at a lodge in Japan as I do at my home lodge in Libertyville! I am extremely thankful to have decided to take the opportunity to attend lodge in Japan, and would recommend it to anyone who has the opportunity!